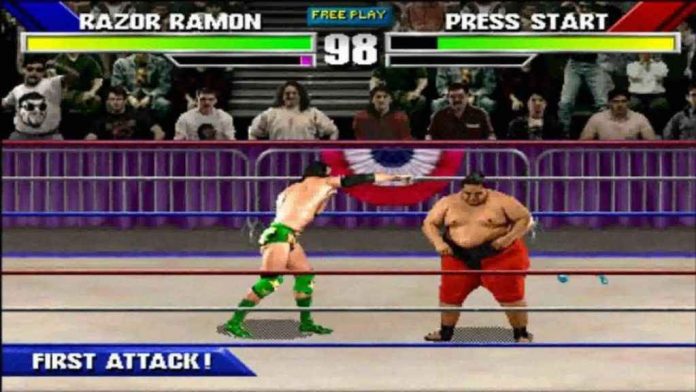 Vintage arcade game Legends of Wrestlemania – A far cry from the perennial favourite, THQ’s Smackdown Vs. Raw, WWE Legends of Wrestlemania is a vintage arcade game to the days where the arcade reigned supreme – with simplified controls and a focus on the action rather than on the bells and whistles, this title is sure to please fans of old school wrestling and is a nice trip down memory lane.

The strongest point of Legends of Wrestlemania vintage arcade game would likely be the robust roster, a list comprised of over forty superstars that one would be hard pressed to find lacking. Jake “The Snake” Roberts, Ravishing Rick Rude, “Superfly” Jimmy Snuka, Hulk Hogan, The Ultimate Warrior, Andre the Giant and more are all present in the game with their original entrance themes, taunts, moves, and mannerisms. Managers are also included in the game, notably Bobby “The Brain” Heenan and “Mouth of the South” Jimmy Hart amongst others.

The choice of venue is also quite suitable, although the arenas themselves are bit on the pale side graphically – a problem that plagues this title throughout. The textures of the arena look somewhat flat and stale, and the crowd models and animation is extremely reminiscent of the early PS2 era. However, the variety is still nice to have present, and one can choose to enter the squared circle in 16 different arena’s – ranging from Wrestlemania 1 through 15 and including the WWE Raw stage set up. That’s right, your legendary matchups can take place at the Silverdome or even Caesar’s Palace!

The match modes include your typical fare, ranging from exhibition matches, tag team matches, hell in a cell, and of course the royal rumble. Further, there is a fairly robust Wrestlemania Tour Mode that includes three different options : Relive, Rewrite, and Redefine. Before each of the matches involved in these three modes, a video montage will be shown relating the emotion and storyline arc that led to the confrontation you are about to take part in.

Seeing these legends in their heyday is extremely nostalgic and the footage used is superb. Will Hulk Hogan deliver that body slam to Andre the Giant and claim the belt in the Silverdome? That is entirely up to you.

As stated earlier, the weak point of WWE’s Legends of Wrestlemania vintage arcade game is surely the graphics and textures used on the crowd and arenas. Even the menu system itself looks somewhat primitive – surely not necessary on next-gen titles. With an additional month of work being put into the project to enhance the atmosphere of the venues themselves (as well as including original entrance videos) this title would have risen from good to simply great.

As it stands, it comes recommended only to fans of the golden age of wrestling – and to those players who enjoy a more arcade style wrestling experience with plenty of competetive Quick Time Events to keep you guessing with regards to reversals and finishers.

When the dust settles and the three count has been made – Legends of Wrestlemania vintage arcade game stands as good effort that does a decent job of serving up a bit of machismo and nostalgia alongside a dose of classic arcade action. At full price, it may be a bit of a miss due to the obvious production values that break through graphically – but at a reduced price it is well worth a purchase, and if it can be had at a budget value, a true bargain.

A Fun and Accessible Wrestling Game on the NES

Professional wrestling games have come a long way since the 1980s. Originally simple packages with easy-to-memorize button combinations and only a handful of modes, wrestling video games now come packed with countless features and modes, rosters of up to 50 wrestlers, and more moves to execute than ever before, a perfect example of this being the SmackDown vs. Raw series.

Before any of that, though, there was Pro Wrestling for the NES, a wrestling game with two modes of play, six selectable grapplers, and no edit modes. Pro Wrestling for the NES is, for all intents and purposes, one of the simplest wrestling video games ever created. Regardless of that, however, it manages to be a highly enjoyable romp in the world of sports entertainment.

Pro Wrestling’s single-player mode is incredibly straightforward. The player picks one of six wrestlers: Fighter Hayabusa, Star Man, Kin Corn Karn, Giant Panther, The Amazon, and King Slender. The goal of the single-player mode is to reach the apex in the Video Wrestling Association by winning matches and ultimately becoming VWA Champion. Once that’s done, the player must defend the title a number of times and go for rival promotion Video Wrestling Federation’s top title.

Wrestling Gameplay in Its Purest Form

The controls in Pro Wrestling are based on an easy-to-master strong grapple/weak grapple formula. By pressing the face buttons in conjunction with the D-pad, players can perform scoop slams, suplexes, backdrops, Irish whips, and more. Each wrestler also has his own finishing moves. These range from somersault dropkicks and spinning backbreakers to enzuigiris and illegal bites.

Players must build up to stronger moves by starting off with weak grapples and strikes. Attempting to perform a strong grapple or finisher early on usually results in that move being countered. This is something that adds a layer of depth and strategy to the gameplay, and it’s fully welcome.

A match can only be won via pinfall in the ring, but wrestlers can take the brawl to the outside area. Here, combatants can perform slams on the floor, Irish whip one another into the ringpost, and more. Wrestlers must return to the ring before the referee counts to 20, though.

In addition to the single-player career mode, there is also two-player versus play. These contests are two-out-of-three falls, so the first player to achieve two victories is the winner of the set. The mechanics in this mode are identical to those in the single-player game. The only difference is that championships cannot be earned or defended in this mode.

The presentation in Pro Wrestling is, much like the gameplay, very basic and very simple. For a NES game, Pro Wrestling looks good. Each of the wrestlers in the game has a unique look, and the use of color has enough variety to give this game above-average NES graphics. Additionally, every wrestler animates smoothly when performing moves.

Despite the fact that there isn’t an overabundance of tracks included in the game, the soundtrack in Pro Wrestling consists of a handful of catchy songs that players will be remembering for some time after shutting off the game. There isn’t a whole lot to listen to while playing this game, but what’s there is good.

There is a lot of fun to be had with Pro Wrestling. Players will find themselves perfecting their skills in an attempt to progress through the single-player mode and unify the VWA and VWF Championships. And once that’s done, there’s two-player mode to keep the value going. This game may not offer all the features of modern wrestling games, but it still manages to be fun without them.

Pro Wrestling – “A Winner is You”

Pro Wrestling on the NES is a very small package when compared to today’s wrestling games. It was a big game back in its day, though, and it remains fun to this day. Despite its simplicity, it has managed to become one of the most memorable wrestling games of all time. Those who can look past the lack of features and wrestlers will definitely find a solid old-school wrestling game experience.

Fingertip instead of earphone : Didn’t try talking through the finger...