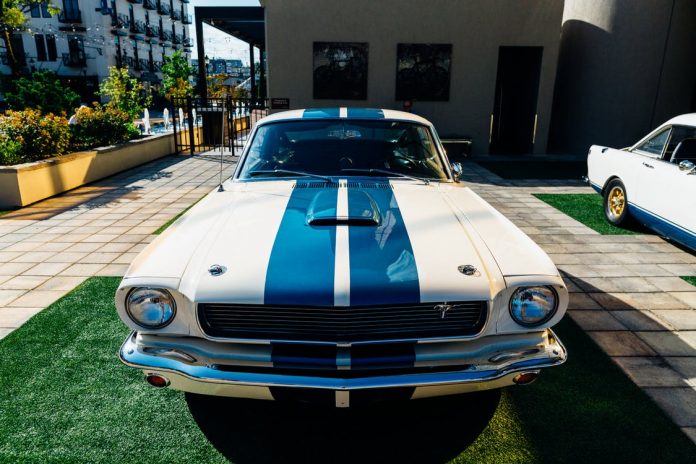 In the early 1960’s Ford Motor Company was still reeling from the embarrassment that the Ford Edsel, released in the mid 1950’s and named after the founder’s son, had brought to the company. Executives including Lee Iacocca wanted something smart, exciting, and modern that would appeal to a younger American demographic.

Iacocca and others looked at the Ford Falcon, originally designed by Ford president Robert McNamara (who later became Defense Secretary in the Kennedy Administration), as a starting point for something to shake up the auto world. Despite selling 400,000 units when it debuted in 1960, the Falcon was disliked by many at Ford as having a boring design and a low profit margin.

Ford’s product planner, Donald Frey, received the go-ahead in August, 1962, to design a car that would re-make the company’s image. He headed up a design team that took the Ford Falcon frame and redesigned the body with an eye to building their new model “as cheaply and simply as possible.”

The Mustang’s target audience was the under 30 year old car buyer who was projected to account for more than half the new car sales in the coming years. It borrowed design elements from the Pontiac Thunderbird and Lincoln Continental Mark II, with its clean, sharp lines, extended hood, and short rear deck.

The Mustang also had bucket seats, a feature that was a definite statement at that time in automobile styling. Bucket seats, a relatively new item in cars of that era, invoked a feeling of speed, independence and freedom that was the exact opposite of the standard bench seat found in most cars.

The Ford Mustang was one of the most anticipated products in American history and the most hyped car since the Ford Model A. During the months preceding its debut a teaser campaign heightened the public’s awareness and interest in the car. “Secret” photos of the Mustang were leaked by Ford to create more of a buzz. Life Magazine called it “the sports car for the masses” while the Tiffany Company gave it a design award before the public had even seen it.

The Mustang was finally introduced to great fanfare on April 17, 1964 at the New York World’s Fair. It retailed for $2,368.00, just a little more than the Volkswagen Beetle. Most buyers chose from a long list of available options which typically added another $1,000.00 to the car’s final price.

Ford received 22,000 orders the first day and sold 400,000 units the first year. The Mustang ushered in the era of the “muscle car” with other car makers designing the Firebird, Camaro, Barracuda, and Marlin to compete with Ford’s popular sports car.

The Mustang quickly achieved the status of a cultural icon in America. It was celebrated in Wilson Pickett’s song “Mustang Sally”, co-starred in Steve McQueen’s movie “Bullitt”, the music video “Ice, Baby Ice”, and the movie “Gone In 60 Seconds.”

A new model Mustang was released in 2004 with design features that paid homage to its predecessors from 1966 and ‘67. The successful sales and reviews bodes well for the Mustang’s place with a new generation of car buyers.

Not far behind the Ford F-150 in price is the widely recognized, respected and desired Ford Mustang. Based on AOL Autos data, the average sticker price for a Ford Mustang is $25,737.

But do the average annual auto insurance rates for a Ford F-150 mirror its average higher purchase price when compared against the yearly premiums for a Ford Mustang or a Focus?Average rates shown are based on the average low and high premiums from over a dozen distinct auto insurers whose rates consumers can compare via the Insurance.com website.

Ford Auto Insurance Rates
Despite the fact that the Ford Focus carries an average sticker price 82% lower than the F-150 pickup truck, the average quoted premium for a Focus during the first 2 quarters of 2009 was 28.4% higher than that for the more expensive F-150.

To make matters worse, average insurance quotes for the Ford Focus have gone up by 12.2% so far in 2009, while the Mustang and F-150 have experienced modest declines.

One possible reason that Focus drivers are tagged with higher average insurance rates is the fact that the Ford Focus receives 4 stars (out of 5) from the National Highway Traffic Safety Administration (NHTSA). Both the Ford F-150 and the venerable Mustang were awarded 5 stars on the NHTSA driver and passenger frontal crash tests.

This suggests higher damage expenses when a Ford Focus is involved in an automobile accident.

In percentage terms, the Ford Focus showed the greatest differences between lowest and highest average quotes during 2009’s first 2 quarters.

$1,434 for Ford Mustang drivers
$1,275 for Ford F-150 drivers.
So while more expensive vehicles like the Ford F-150 pickup truck do not necessarily result in higher auto insurance premiums, F-150 vehicle owners can save an average of 65.9% or $1,275 annually by shopping around for the lowest auto insurance quotes.

The most costly vehicle to insure, the Ford Focus, also offers the greatest opportunity for insurance savings. Focus drivers can save on average almost 75% or $1,650 on their yearly automobile coverage costs.

Ford Mustang owners can save a hefty average 61.6% or $1,434 off of their annual car insurance premiums.

The biggest takeaway from this brief look at Ford vehicle insurance rates is that consumers need to compare rates from a number of insurers before renewing their auto insurance policies – regardless of the Ford car or truck they drive.

Anti virus For Free – What Are the pros?